Hey-o! I've been living in Flint, Michigan, for almost three months. It's crazy how quickly I've become attached to the community in Flint. It's nothing like what I expected before moving from Florida to Michigan, besides being really freakin' cold (that was a given). There is a broken beauty that blankets the community that I haven't found anywhere else I have lived. I've been having a great time learning from and working with my small photo crew: my boss, Jake May, and my internship partner-in-crime, Brittany Greeson. Here are a variety of single images I have taken on at The Flint Journal so far: 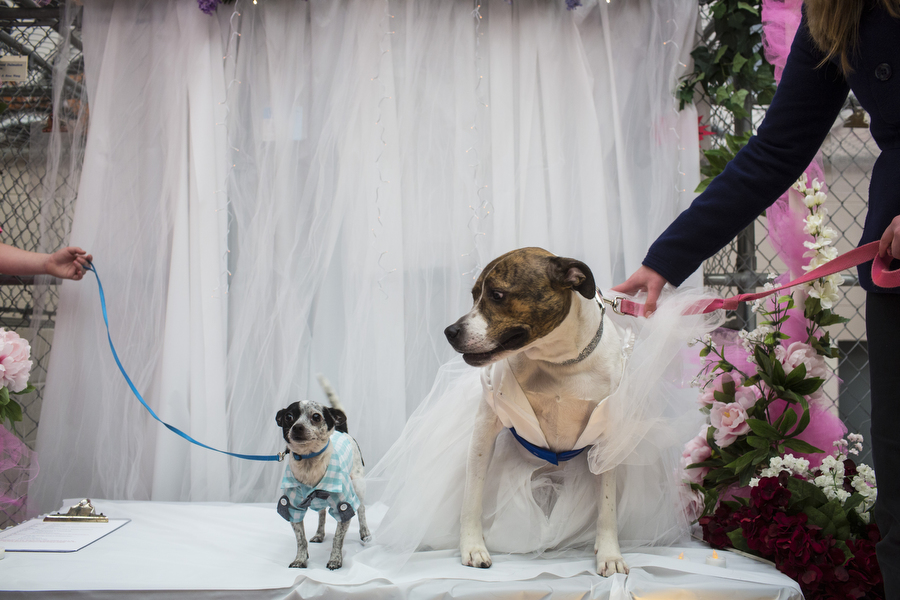 Mr. Taco Brooks and Miss Ghia Huffman pose for photos at the alter after saying "I do" in the Pooch Nuptials Royal wedding on Saturday, Feb. 7, 2015, at the Humane Society of Genesee County in Burton. The ceremony was held at 1 p.m. with a reception of cake and punch following immediately after. 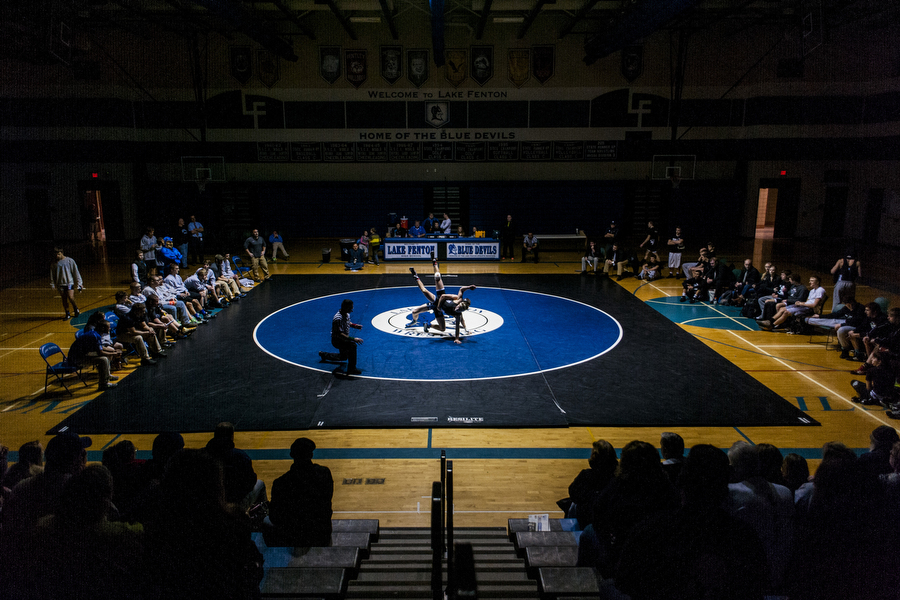 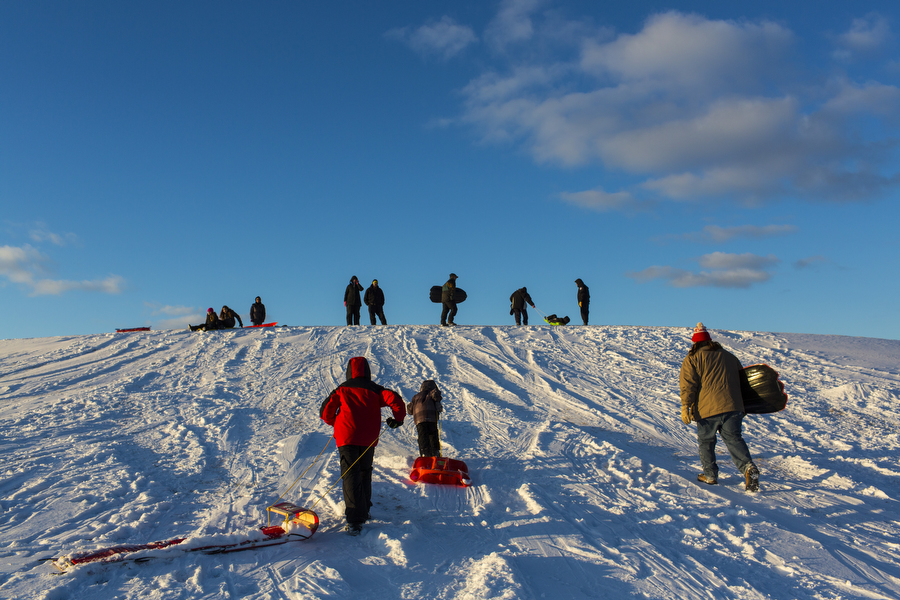 Families take advantage of the sunny evening on Monday, Jan. 12, 2015, while sledding at Elms Road Park in Swartz Creek. 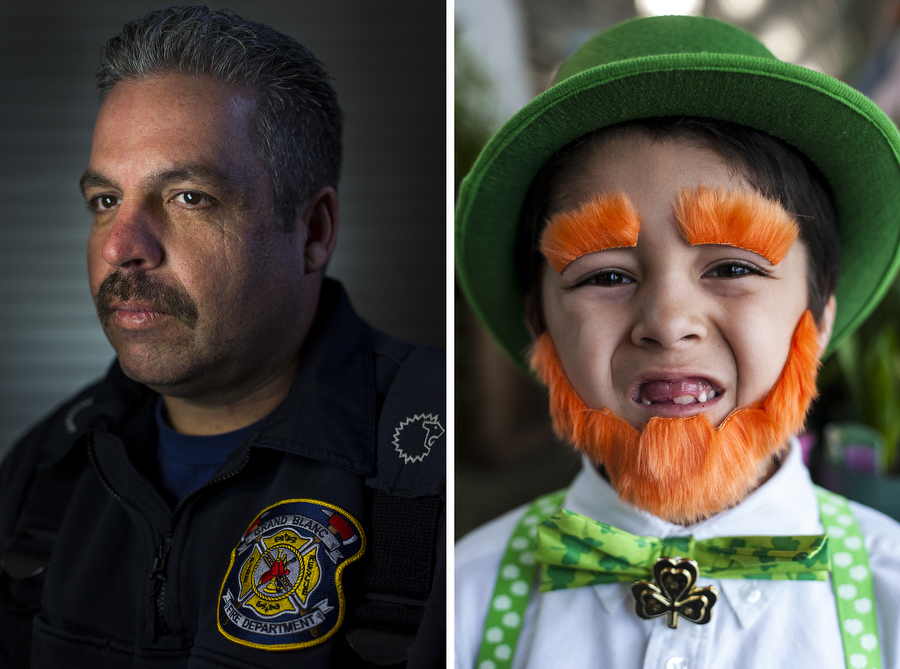 Right: Adrian Torres, 7, dressed up as a little leprechaun during "Show Your Irish" Day on Saturday, March 14, 2015, at the Davison Farmers Market in Davison. 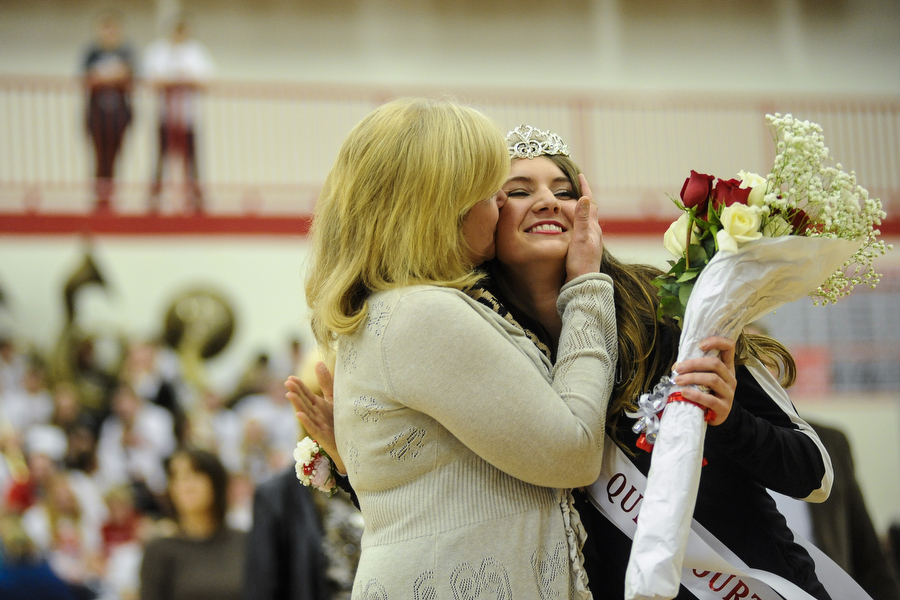 Holly senior Jillian Clark, 17, right, receives a kiss from her mother, Dawn Clark, after being crowned the school's 2015 Snow Queen on Friday, Jan. 30, 2015, before the varsity boys basketball game against Fenton in the gymnasium. Clark, who will be attending Grand Valley State University in the fall, is the caption of the varsity dance team. 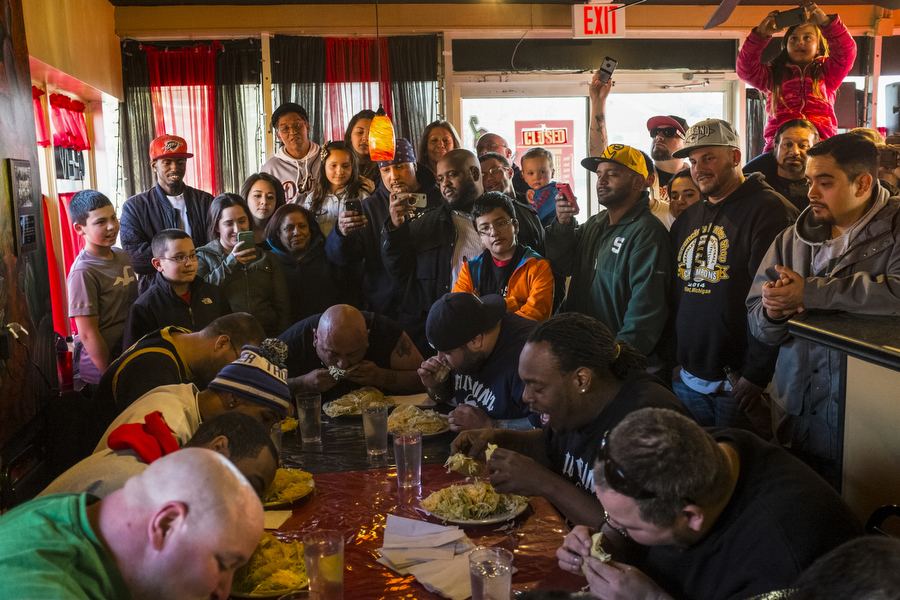 Twelve contestants participate in a taco eating contest on Saturday, March 28, 2015, at Poco Loco Mexican Cafe in Burton. The contestants were tasked with eating as many medium shell tacos as they could in five minutes. Chris Ascencio, center, the 2014 taco eating champion, attempted to defend his title by eating the filling first and then the shells. Although Ascencio was close, Pakone Mireles, no pictured, beat him by eating 13 tacos within the small time limit. 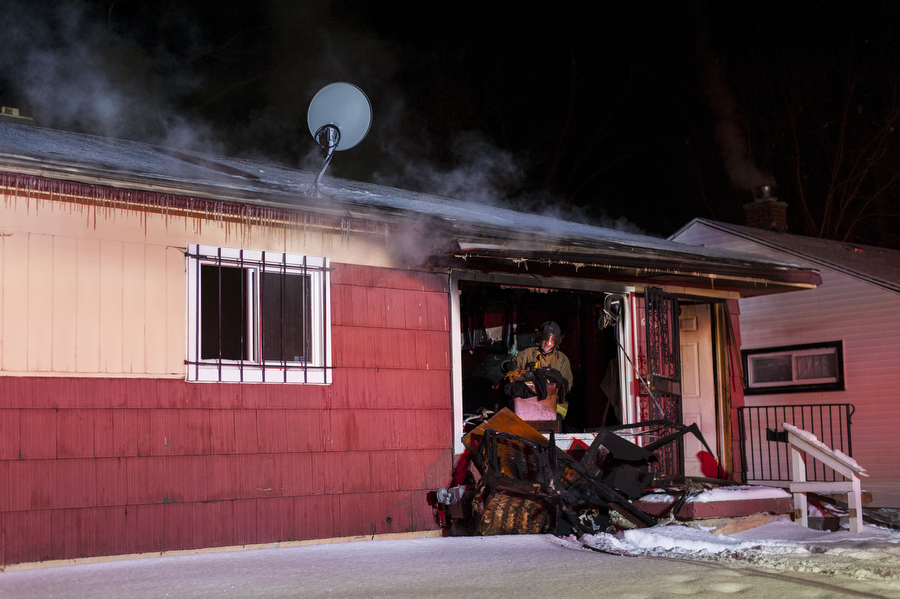 Flint Firefighters work to contain a structure fire that spread from the kitchen in the back of a house on Wednesday night, Feb. 4, 2015, in the 600 block of Alma near the corner of College street in Flint. The fire was knocked down quickly, but there was significant smoke damage. Flint Police Sgt. Dave Bigelow said one person has been taken into custody in connection with the fire, suspecting that a disagreement between the homeowner, Catarra Lewis, and the suspect may have led to the blaze. 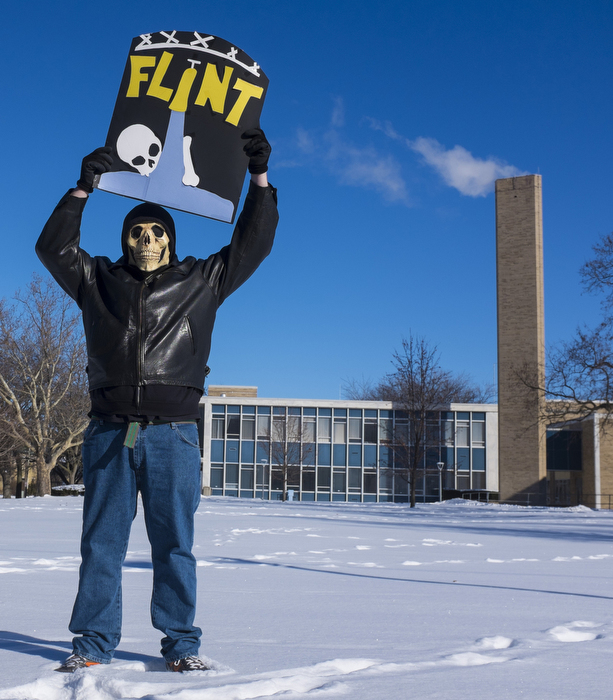 Adam Mays, an artist and Flint resident, protests the condition of the Flint water system at Fifth and Saginaw in Downtown Flint, Michigan, with a few handfuls of other protestors, Tuesday afternoon, January 13, 2015. 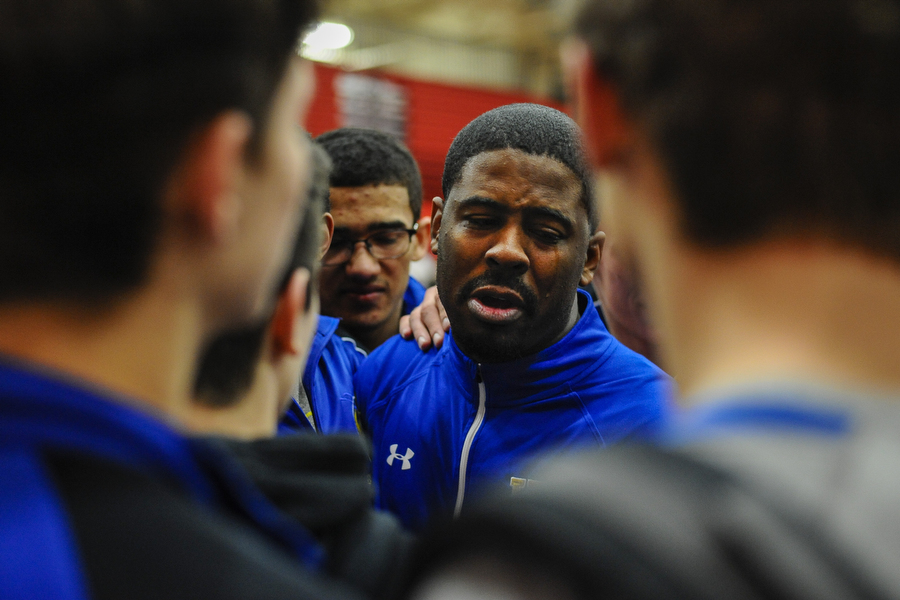 Flint Kearsley head coach Luther Brown sheds a few tears as he tells his team how proud he is after winning the  MHSAA Division 2 Team Wrestling Regionals on Wednesday, Feb. 18, 2015, at Linden High School in Linden. After a close match, Flint Kearsley beat Ortionville-Brandon by one point, 37-36. 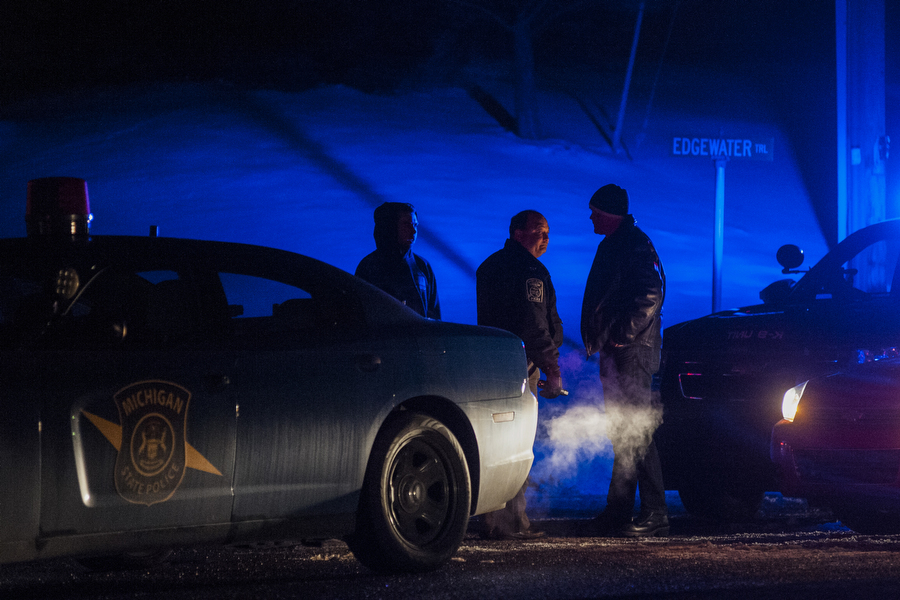 Michigan State police work with Grand Blanc City and Township police as they respond to barricaded gunman at the 1000 block of Edgewater Trail near Baldwin Road on Saturday, Jan. 31, 2015, in Grand Blanc Township. The suspect was taken into custody around 9:30 p.m. and no injuries were reported. 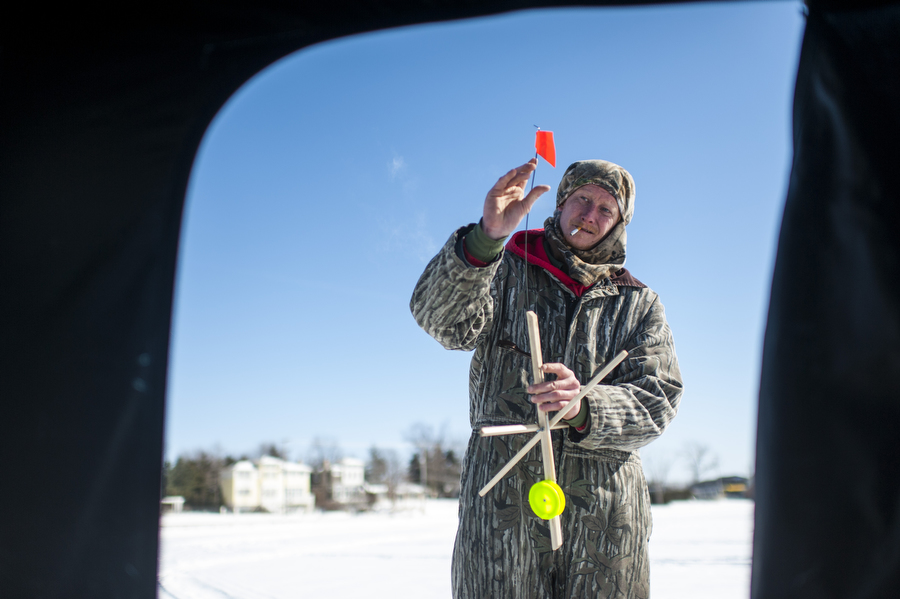 Lake Fenton resident Lee Asbel, 32, shows off his ice fishing tip-up and explains how it works on Sunday, Feb. 15, 2015, while standing on the frozen lake in Fenton. An avid outdoorsman, Asbel hates wasting a day inside even when the wind chill caused temperatures to dip below -25 degrees on Sunday afternoon.  "I was watching the news and got tired of being depressed," he said. "So I had to come out here." 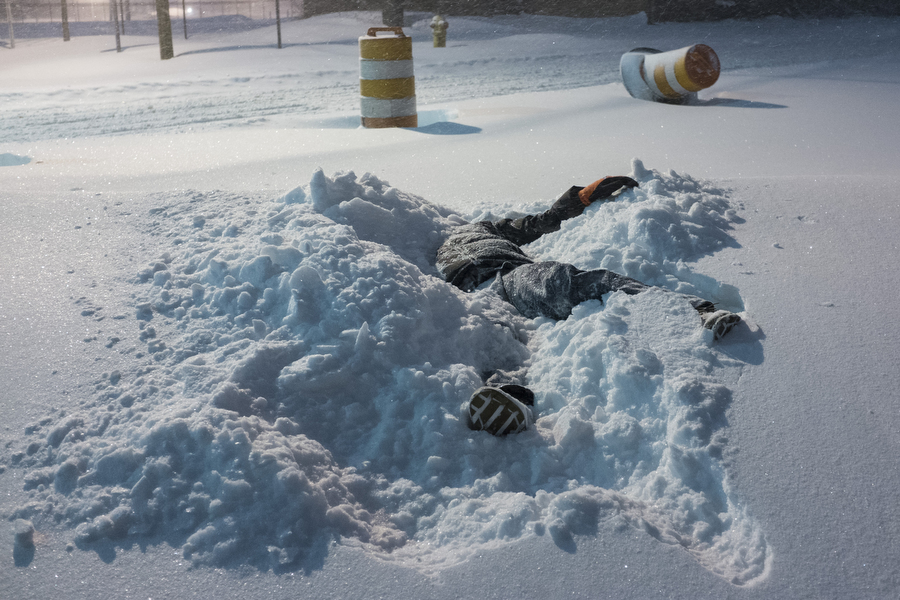 Jake May, chief photographer at the Flint Journal (as well as a great boss, friend and left shark), cooling off in the freshly fallen snow on Sunday, Feb. 1, 2015 after watching the Super Bowl at our apartment complex in Flint. Weather service reports that areas around Genesee County accumulated between 8-11 inches of snow during a continual snow fall that lasted from early Sunday morning through early Monday morning. 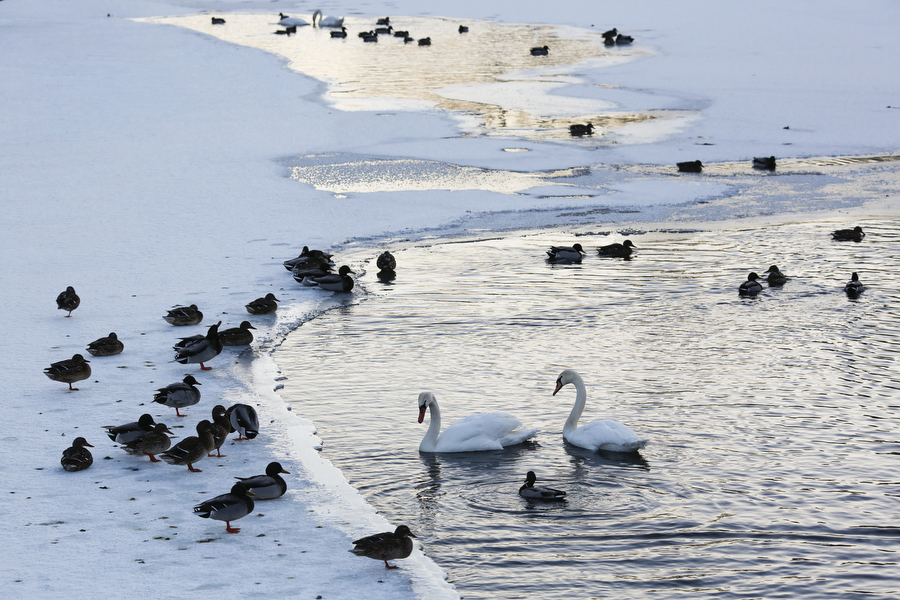 Snow geese and a large group of ducks gather together in the icy water as the temperature drops on Monday evening, Feb. 2, 2015, at Bennett Lake in Fenton Township. 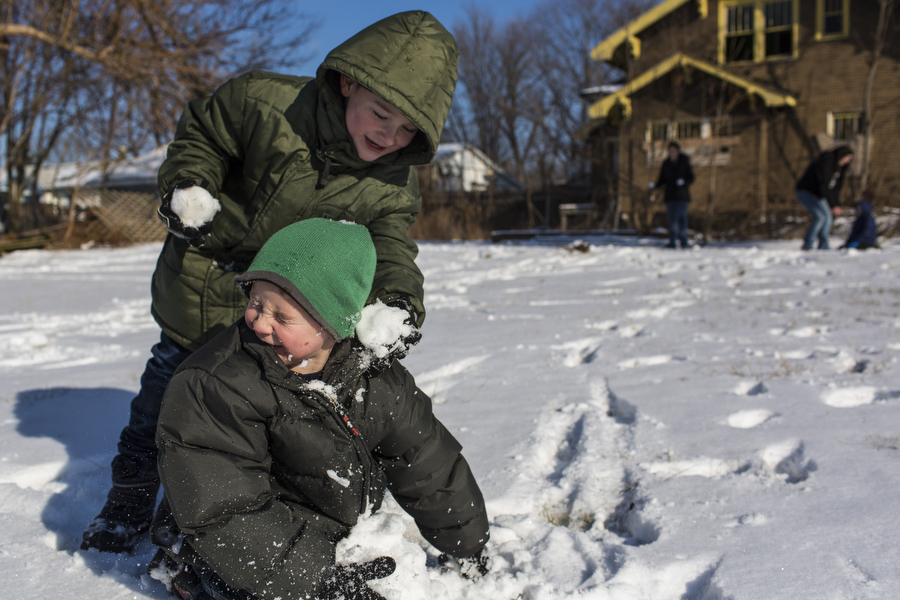 "Eat snow! Eat snow!" said Joseph Brown, 7, as he bent down to shove a snow ball in his little brother Kaleb's face while soaking up some sunshine on Friday, Jan. 23, 2015, outside their home in Flint. The weather was partial cloudy with temperatures reaching the high thirties on Friday, which lead the Brown family outside to play in the snow. 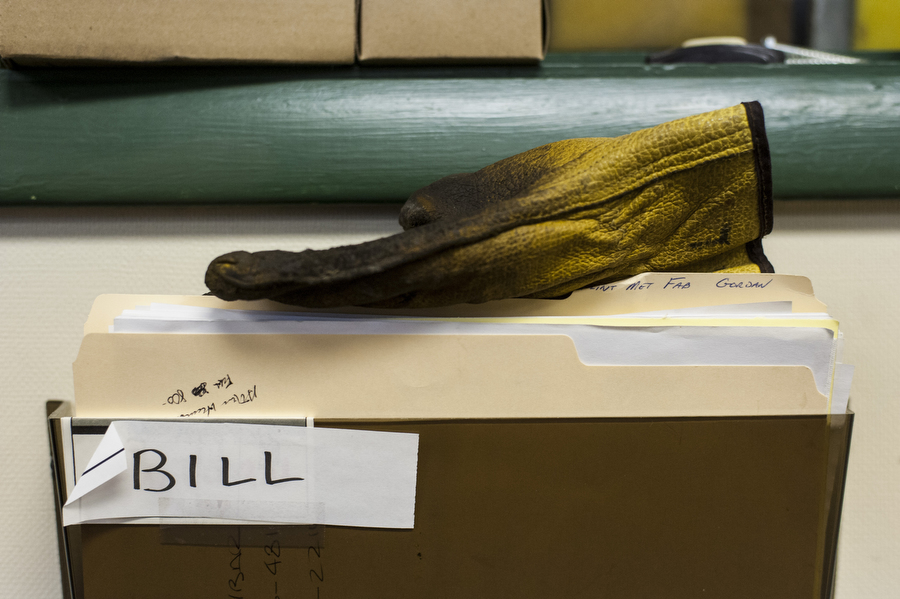 William Dover, who goes by Bill, celebrates his retirement with family, friends and fellow employees on Friday, Feb. 13, 2015, after working at Dover & Company, a third generation family owned business, for over 50 years in Flint. Dover's grandfather Wilfred C. Dover founded the company, originally a coal, mason supplies and feed store before beginning to sell garage doors in 1946. Then Dover's father Wilfred "Jack" Dover took over before handing the business over to Bill. 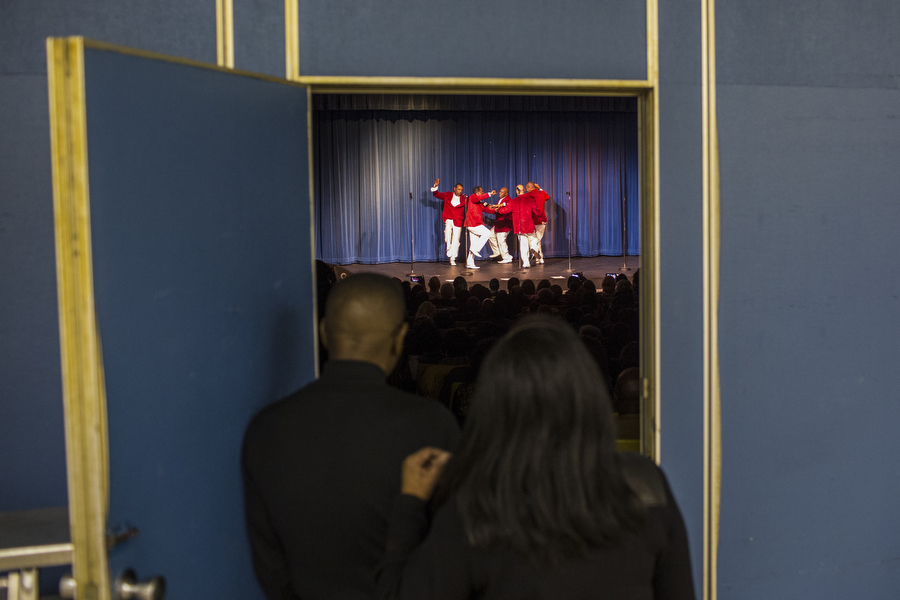 Members of the dynamic vocal group Heartbeats L.O.S. perform for a nearly sold out crowd on Friday evening, Jan. 23, 2015, at the New McCree Theatre – located at the old Flint Powers Catholic High School building – in Flint. This was the first show that was filled to the brim with people after the theatre's move from its old home at 5005 Cloverlawn – also known as the former Urban League building – in September 2014. 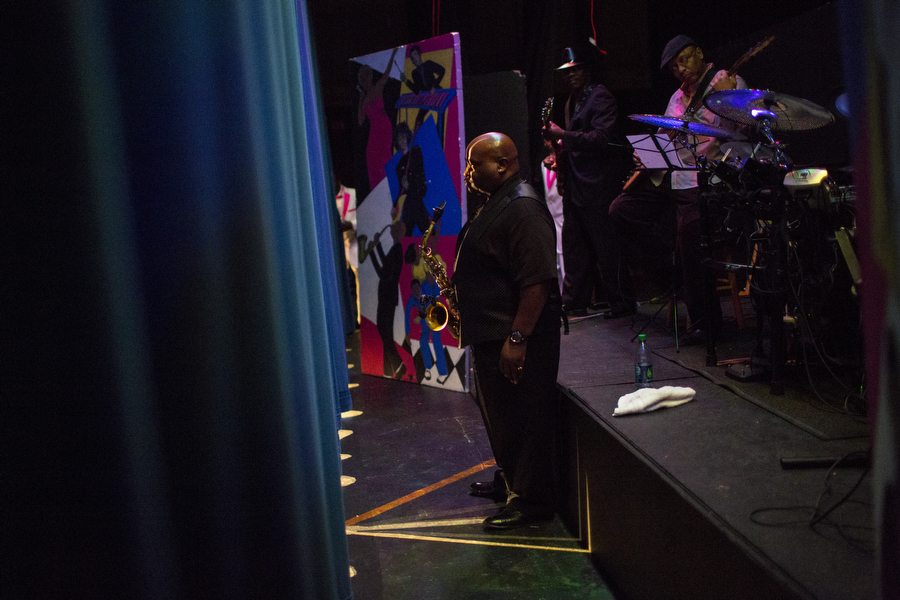 The Heartbeats musicians wait for their cue to play music behind the curtain for the dynamic vocal group Heartbeats L.O.S. during their nearly sold out performance on Friday evening, Jan. 23, 2015, at the New McCree Theatre – located at the old Flint Powers Catholic High School building – in Flint. 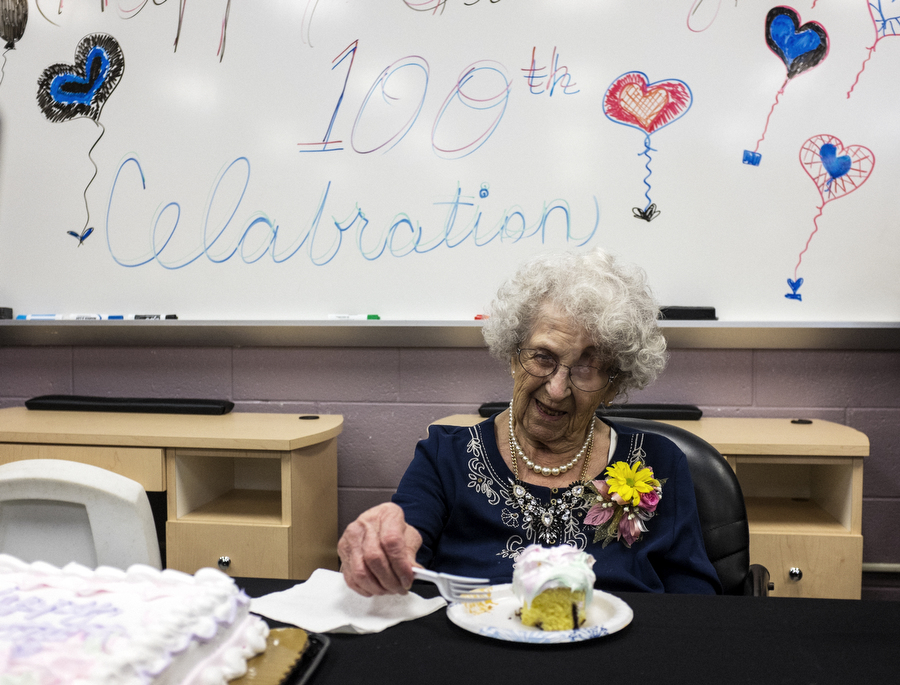 Pauline Dobis celebrates her 100th birthday with students and faculty of Mott College Transitions School of Cosmetology Careers Salon on Thursday, Jan. 22, 2015, at MCC in Flint. Dobis, a 46-year client of Transitions, turns 100 on Sunday, January 25, 2015. She has a standing appointment on Thursday's at 11:30 a.m. for a wash and style. Dobis lost her left eye due to surviving cancer over 20 years ago. She says she strives to "live a happy life with no enemies," which she thinks has contributed to living as long as she has. 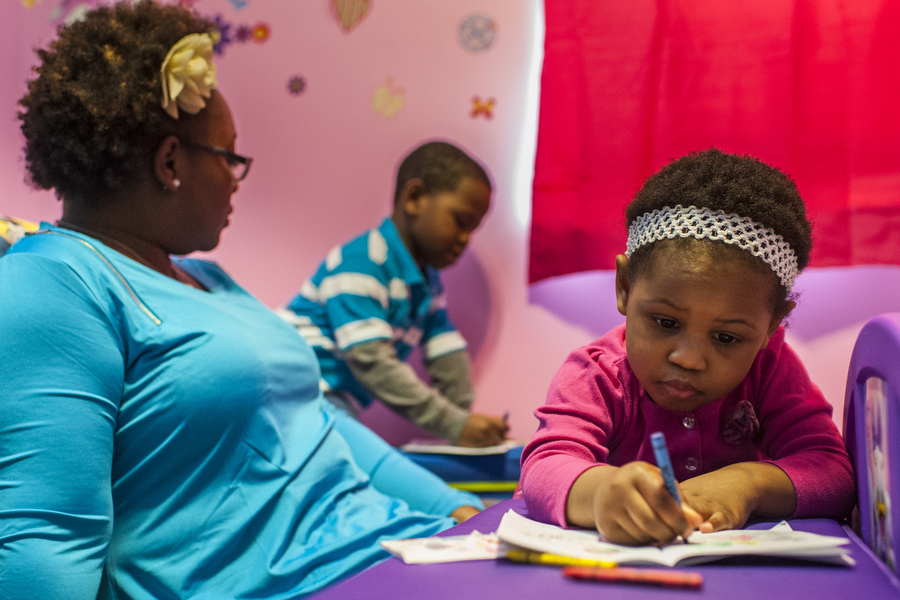 Clarissa Ruffin, 2, right, colors in her princess coloring book on Monday, Feb. 16, 2015, with her mother, Ashley Liddell-Ruffin and older brother, Clarence Ruffin, 5, at their home in Flint. Clarissa is one of the the ambassadors for Hurley Medical Center's Annual Benefit Ball. In May of last year, Clarissa was admitted to Hurley for 27 days with severe pneumonia. After having surgery on her lungs, she had to relearn how to walk and has recovered well. 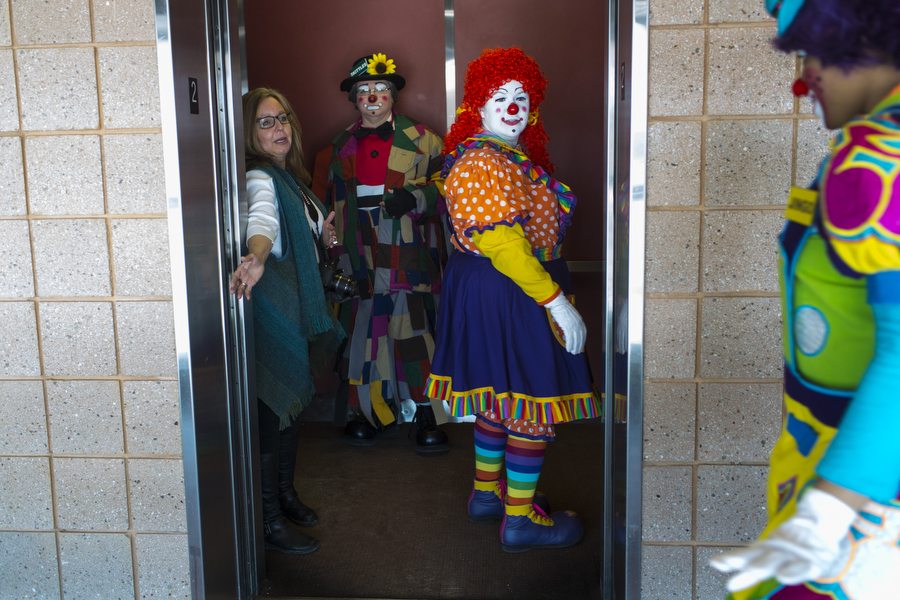 The Mott Campus Clowns head back to the classroom after getting group photos taken on Friday, Feb. 27, 2015, in the Regional Technology Center/M-TEC building at Mott Community College in Flint. After getting dressed and taking photos, the clown troupe had two performances at the International Academy of Flint and the Boys and Girls Club of Greater Flint on Friday afternoon. They will also be traveling out of the area for an Alternative Spring Break service trip to Philadelphia from March 7-15.